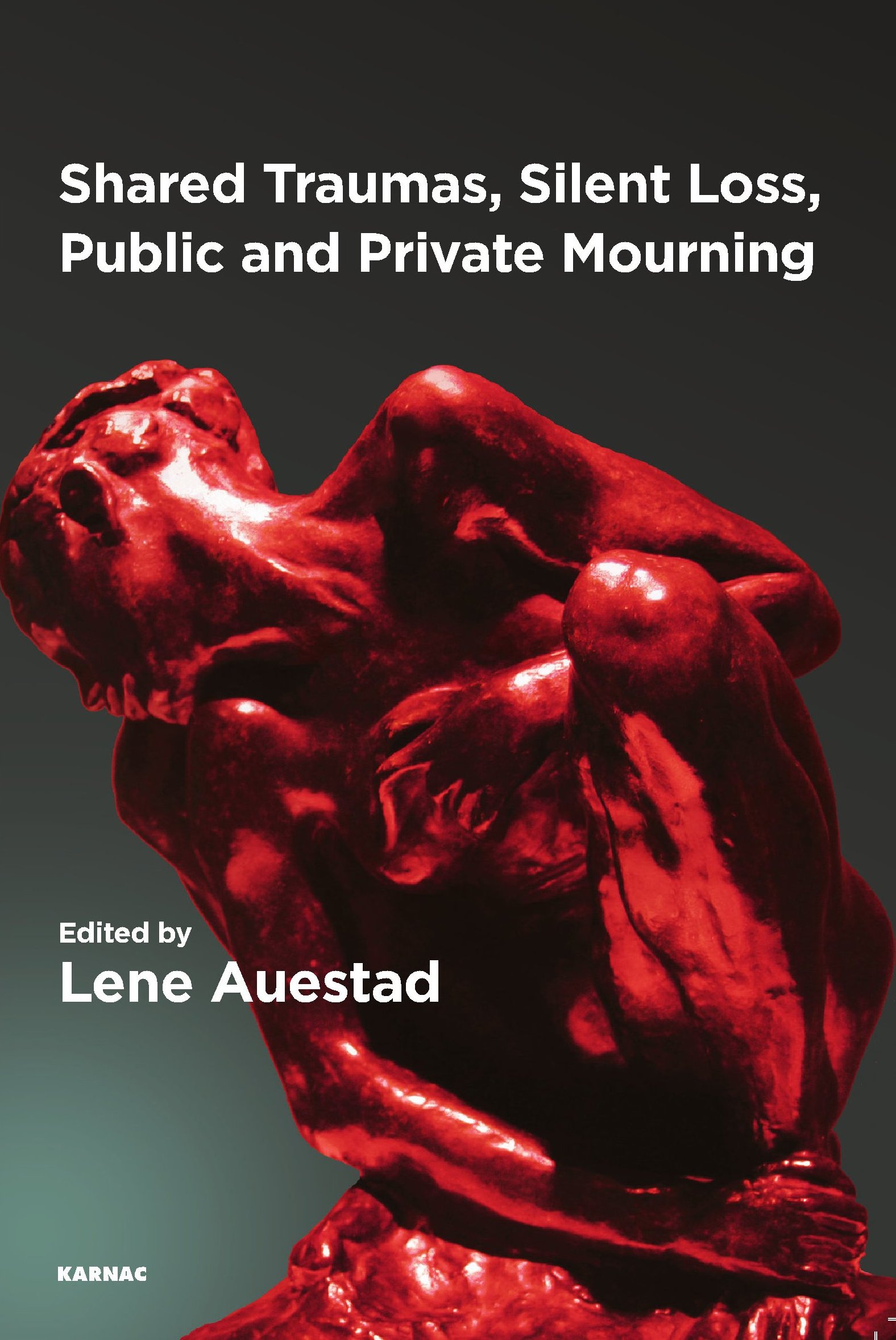 This book aims to question the junctions of the private and the public when it comes to trauma, loss and the work of mourning, notions which, it is argued, challenge our very notions of the individual and the shared. It asks, to paraphrase Adorno: What do we mean by ‘working through the past’? How is a shared work of mourning to be understood? This poses the question of what mourning might mean and what its social dimension consists in.

“This fine collection of essays, the third in the Psychoanalysis and Politics series,
edited with generosity and care by Lene Auestad, addresses the fundamental
human experience of mourning. How do individuals and social groups
confront the distress of unredeemable loss? Is a working through
that is not merely a question of leaving the dead behind possible?
These are key psychoanalytic questions with distinct political ramifications
and in addressing them, the volume ranges across disciplines, geographies
and histories, offering the reader challenges, surprises and often hope.
In its inclusivity and scope, it is more than merely a welcome
addition to a field of study, but opens up new ways of
thinking about the possibilities of surviving the unbearable.
– Dr Julia Borossa, Associate Professor, Director of the
Centre for Psychoanalysis, Middlesex University, Group Analyst.

The illuminating cases presented in this volume outline the psychosocial
consequences of political trauma under varying historical conditions.
They do so in ways emphasizing how individuals, groups, and entire societies
respond to the hurts and pains lingering in the tormented aftermath
of collective violence and personal violation. A poignant brilliance
emerges out of the analytical sorrow communicated chapter to chapter
through the care-filled depictions of collective mourning and often its failures
or inadequacies across cultures. This contributes to our understanding
of the inexpressibility of agony and the harms wrought by ineffable suffering.
The consequences after trauma often assume subterranean psychic
and emotional forms. But they become manifested by the psychodynamics
of inner conflicts within individuals and all too frequently
by the external social exclusions of individuals and groups
at once beset by painful memories and further besieged by indifference
or even rejection as well as by silent codes of cultural denial.
As such, this book helps to define the theoretical basis for further development
of comparative mourning and bereavement studies.
– Professor Edward Weisband
Edward S. Diggs Endowed Chair in the Social Sciences,
Department of Political Science, Virginia Tech

“This book is the fruit of  an  innovative blending of Psychoanalysis and Politics,
defying academic orthodoxy by creating a series of conferences on relevant social issues, inviting psychoanalysts, political scientists, and others to think together and create a dialogue crossing boundaries of their discipline. I was very lucky to attend two of these meetings, one in Budapest, the other in Barcelona, and experience the richness of this interdisciplinary community. Lene Auestad, the initiator of these symposiums chooses to hold each conference in a different country, under the auspices, and in the rooms of the local official psychoanalytical society.
Today “Shared Traumas, Silent Loss, Public and Private Mourning”  confront us daily not only through the physical violence of terrorist attacks but also collective “political” traumas such as the “Brexit” of  England from the European Union and the election of Mr. Trump as president of the United States. Whether we like it or not our paradigm of the world has become globalised and traumatic events are now shared as never before.  The present volume sheds light on this difficult subject from different angles.
Inspired by the work of the psychoanalyst  Donald Winnicott, the first chapter  explores how trauma can be worked through by play. Art attempts to embody trauma, giving form to the fragmented psyche. The second chapter, based on the work of the Hungarian psychoanalyst, Sandor Ferenczi, questions the function of public memorials of the Holocaust in relation to trauma. The third chapter explores the possibility of “mending the world” after Auschwitz. The author examines the work of the philosopher and reform Rabbi Emil Fackenheim on how the Holocaust has affected the foundations of Jewish thought.
Concrete experiences inform our understanding of trauma’s impact on future generations in “Holocaust survivor mothers and their daughters”. “Unable to mourn again?” looks at Germany neo-Nazi terrorism through the eyes of the psychoanalysts, Alexander and Margarete Mitscherlich. Has Germany been able to mourn its victims as well as itself ? “Politicising trauma – a post-colonial and psychoanalytic conceptual intervention” attempts to help us unravel the powerful intersubjective and sado-masochistic penetration of the “death drive” in the trauma of violence. Can war be mourned? The example of war torn Lebanon takes us into questions of endless grieving. Multiple wars have created loss that remains ever present and the attachment to what is lost cannot be dissolved. We hear the voices of Taiwanese “comfort women” as the author examines the trauma of the sex slaves of the Japanese Imperial Army during the Pacific War.
In “Trauma, mourning and memory in three plays by Ariel Dorfman” we witness individual and collective reponses to trauma in their attempt to mourn the tragedies experienced during the Chilean dictatorship. The final chapter takes a close look at the difference between the people who gave Clement Atlee’s Labour government, their massive support to build a welfare state and the ones who chose Margaret Thatcher and her Conservative Government to implement a programme of radical privatisation. Is the question : “Victory and defeat : from Beveridge to Thatcher without tears” applicable to-day if we replace the names with “from Obama to Trump”?
This  inspiring collection of essays enriches our knowledge through past examples, and most importantly  challenges us about our world to-day.”
– Kathleen Kelley-Lainé, Psychoanalyst,
Société Psychanalytique de Paris, France

“Auestad’s important conference series Psychoanalysis and Politics, soon to celebrate ten years of existence, here delivers its most significant book to date. Shared Traumas, Silent Loss, Public and Private Mourning investigates a broad range of topics ranging from memorial public art to war games, media, sex slaves to the Japanese and political drama. The contemporary political situation has often been understood in terms of mourning, as a response to the loss of political ideals, of real and imagined communities, thus making trauma and mourning into key affects for an understanding of modernity. Although there is an emphasis on understanding mourning and its consequences from the post-Holocaust point of view – installations, neo-Nazi terror, Jewish thinking, intergenerational trauma – the book also engages with the effects of colonialism in its other, more encompassing dimensions outside of Europe. This book is thus situated at the crossroads of a more closely knit “European” identity and its opening onto a more global scene that it has always depended on but too rarely acknowledged.”
– Nicholas Smith, Senior Lecturer in Philosophy,
Södertörn University, Stockholm

Jonathan Davidoff: To mend the world: Trauma, mourning and containment

Edna Mor: Holocaust survivor mothers and their daughters: The intergenerational mourning process as a journey in search of the mother

Nayla Debs: On-going mourning as a way to go beyond endless grief: considerations on the Lebanese experience

Jenyu Peng: When the “comfort women” speak: Shareability and recognition of traumatic memory

Jean-Francois Jacques: A relational approach to trauma, memory, mourning and recognition through Death and the Maiden by Ariel Dorfman

Jane Frances: Victory and defeat – from Beveridge to Thatcher without tears