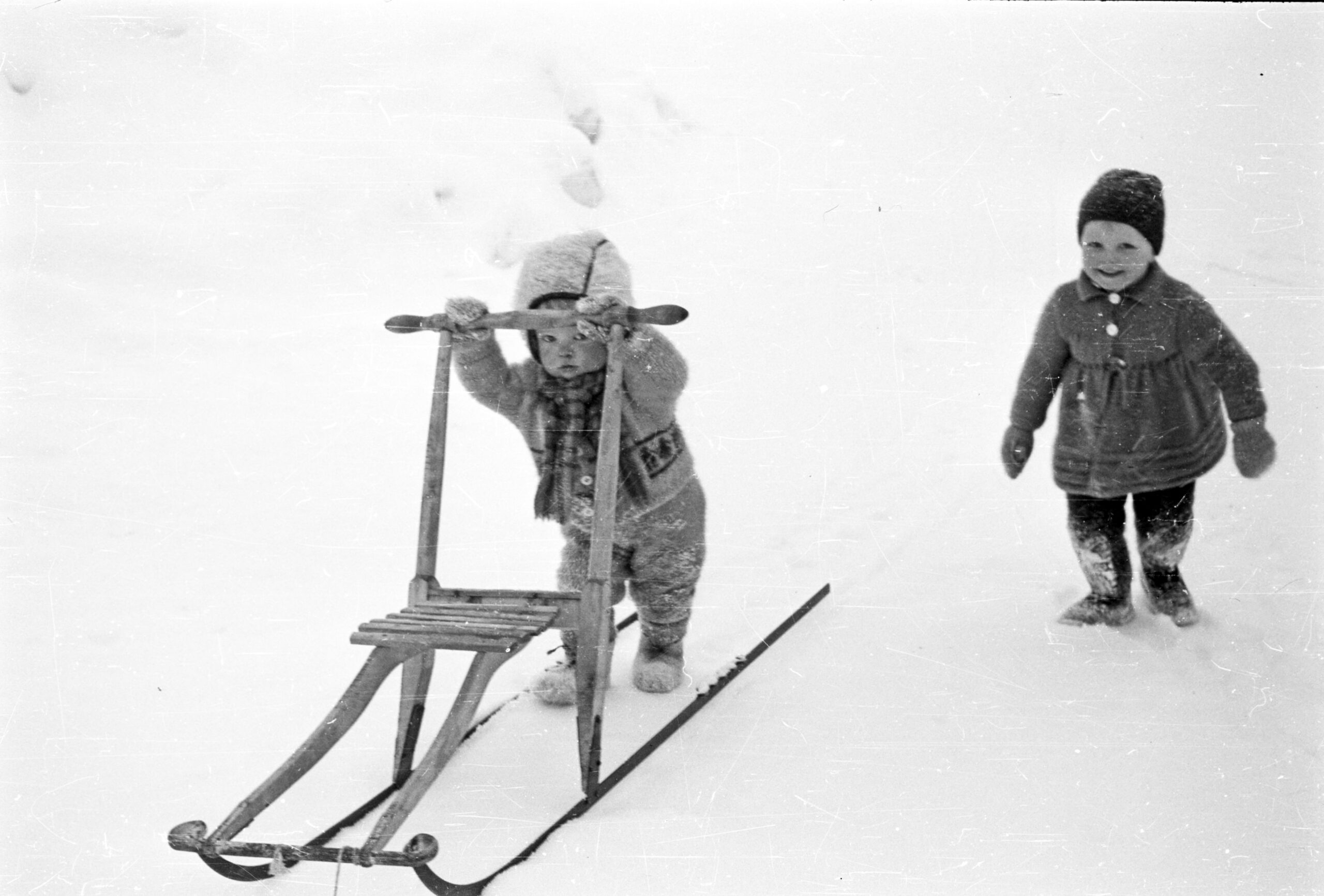 Once upon a time, it must have been during the first half of the 80’s, a friend and I drove kicksleds down Tåsen hill. The road was called Tåsenveien, though this part went steeply downhill, thus we called it Tåsen hill. Kicksleds were common at the time, when I went to primary school, for they can only be used when there is a lot of snow. The picture displays the anatomy of the kicksled – a wooden chair with handles is placed on top of two metal rails. One would stand on top of one of these rails with one foot and kick off with the other, and the chair allows for one person to be seated in front. My childhood friend took off first. She had her little brother placed on the seat in front of her. A bit down the hill were two bastard boys equipped with mini skis. Mini skis, short, broad skis made out of plastic, were popular at the time. They had loaded their mini skis with snow, and threw the snow in the faces of my childhood friend and her little brother as they passed. I followed after them, and fortunately, I had been going to jiu jitsu. I stopped the kicksled in front of the first bastard boy and struck the mini ski with the snow out of his arms from below. I then drove on a bit further and stopped in front of the other one, and for the sake of variety I kicked the ski out of his arms. In neither case did I touch the bastard boys; I only touched their skis. They were both left dumbfounded, as if they had just fallen from the moon, while I continued down the hill.

It is being said that the highlights of one’s life passes before one’s eyes before one dies. This is probably only nonsense, though it is an interesting idea. At least I know that even though I have done some important things later in life – published books, completed a doctoral dissertation (PhD), travelled to some wonderful places, met some unforgettable people – this moment would undoubtedly be part of that series of highlights.

When the next episode took place I was an adult. I had a temporary job at the Parliament’s (Stortingets) text centre, where we edited texts the politicians produced. The temporary employees were put in during intense periods, and we were therefore working shifts at night. This is why I found myself one night on an ordinary workday outside Stortinget (the Parliament) on my way home. The streets were completely empty. Though a man started to follow me while calling out at me. It was a scary situation. Plan A, I thought, is to ignore him, keep walking, pretend he doesn’t exist. Plan A did not work – he kept following me and shouting at me. Plan B, I then thought, would be to start running. But there were two drawback to that plan. First, I would then have to run down Akersgata, and it was a scary street at the time – not somewhere you would want to be in the middle of the night. Second, I wanted to reach my bike, which was parked, which was parked further away, and at this point this bloke was placed in between me and my bike. Thus I discarded Plan B and turned to Plan C. Fortunately, I had some experience with both jiu jitsu and kick boxing. This experience gave me the courage I needed. So I went right up to him, grabbed him by the collar with both hands, and hissed something along the lines of “Get off”. At once he turned very feeble, and said “I didn’t really mean anything by it”. It would have been amusing if it had not been for the fact that the situation was so threatening. So I got hold of my bike and cycled home unharmed. I thought at the time that part of what I had learned was to turn fear into anger, since these two affects are fairly close.

In both these cases the aggressors were so surprised when the situation was turned on its head that they were completely paralyzed. Endless tolerance towards aggressors is not always the answer. Sometimes the answer is to stop them.

Photo: Children with a kicksled by the Bardu river in 1951. By Edvigs Kanavin/NVE. Creative Commons, from Store Norske Leksikon.