BOOK DESCRIPTION: Thinking psychoanalytically about the nature of social exclusion involves a self-questioning on the part of the interpreter. While we may all have some experiences of having been subject to stereotyping, silencing, discrimination or exclusion, it is also the case that, as social 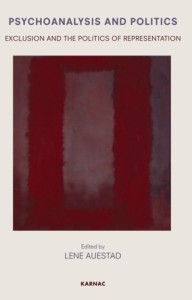 beings, we all, to some extent, participate in upholding these practices, often unconsciously. The book poses the question of how psychoanalysis can be used to think about the invisible and subtle processes of power over symbolic representation, in the context of stereotyping and dehumanization: What forces govern the state of affairs that determine who is an ‘I’ and who is an ‘it’ in the public sphere? Thinking in terms of ‘containment’, a communication which is denied a social space for expression can be said to be actively stripped of meaning. Through its original contribution of attending to, and interpreting material that so far had seemed meaningless, psychoanalysis has demonstrated a capacity to reinstall meaning where none was before – but how are such acts performed on a social level? When common responsibility is displaced onto a suitable class or group and its representatives, the end point is reached when the individual is objectified and the social aspects of the process are no longer recognized. His or her position becomes an illegitimate one from which to speak – the person’s subjectivity is excluded. The book poses the question of how we can conceive of the ‘how’ and the ‘why’ of this phenomenon and of possible counter-gestures.

‘Drawing on several contemporary forms of psychoanalysis and the social sciences, this collection of original theoretical and empirical contributions to a nascent European object relations perspective helps us to understand the current resurgence of social prejudice against ethnic minority groups and the scapegoating of them in the search for safety and fulfilment in the illusion of perfection. This is the first of a series of volumes building bridges between academic, clinical, and political work.’

‘This brilliant collection of essays edited by Lene Auestad articulates diverse strands of psychoanalytic theory and offers lucid interpretations of a wide range of historical experiences of social and political exclusion. The volume widens our understanding of the logics of “othering” and violence that take place in our society. It adds a valuable resource to the growing interdisciplinary field of psychosocial studies, and particularly to the study of the intersection of politics and psychoanalysis.’

‘Anyone who doubts psychoanalysis has useful things to say about the social world should read this book. It is, by any measure, an important contribution to our understanding of the politics of social exclusion and reminds us, once again, why the task of psychoanalytically informed social and political analysis remains urgent.’

‘At a time of protracted economic crisis and global insecurity, malignant political developments such as resurgent nationalist extremism cast a shadow across Europe from Norway to Greece. This very timely volume goes beyond traditional forms of political analysis to examine the unconscious phantasies, powerful affects, and nonrational dynamics which underpin attempts to establish new forms of national purity and racialised exclusion.’

Subjectivity and Absence – Prejudice as a Psycho-Social Theme – Lene Auestad

The Excluded in Identification – Calum Neill

‘Who is afraid of DSM?’ The Place of the Subject in the Society of Therapy – René Rasmussen

Traces of Trauma in Post-Conflict Guatemala. Theoretical Reflections on the Effects of Trauma on a Social Organization – Elisabeth Rohr

PART 3: THE EXCLUSION OF PSYCHOANALYSIS; LIMITS AND EXTENSIONS

The Extensions of Psychoanalysis: Colonialism, Post-Colonialism and Hospitality – Julia Borossa

Review by Ben Tyrer in Free Associations no 67 2015 (in English, open access)