“The social unconscious and the herd“, article in New Associations, by the British Psychoanalytic Council, issue 20, spring 2016 Link to the article

“Basic Trust and Alienation, or ‘We have nothing to Reproach Ourselves With'”, article,  Psychoanalysis, Culture & Society no. 4 2015. Link to the article

“Talakter, upprepning och förnyelse” (“Speech, repetition and renewal“) Article on hate speech in Divan, journal for psychoanalysis and culture, special issue on politics, no. 1-2 2015 (in Swedish) Link to the table of contents 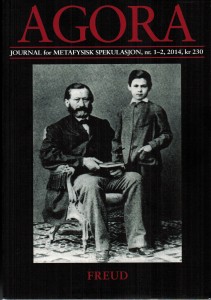 etikk” (“Responsibility and the unconscious. Sketches for a psychoanalytically informed ethics”) in the philosophy journal Agora no 1-2 2014, Special Issue, Freud. Link to the table of contents

“Idealised sameness and orchestrated hatred: extreme and mainstream nationalism in Norway” article in the book Lene Auestad ed. Nationalism and the Body Politic. Psychoanalysis and the Rise of Ethnocentrism and Xenophobia. London: Karnac 2013. See books

“Injurious Speech and Frames of Mind”, article in the journal Impuls, Tidsskrift for psykologi, temanummer Dynamisk innblikk, no 2. Abstract/Introduction: After the devastating terrorist acts performed by a right-wing extremist in Norway in July 2011, and intended as an attack on multiculturalism, debates on the impact of racist, islamophobic and xenophobic utterances have figured prominently in the Norwegian media. The present article is motivated by a wish to go beyond arguing for or against unrestricted freedom of speech or legal limitations on discriminatory statements. Taking unconscious forces into account, I argue, we can contend that outright racist, or otherwise discriminatory statements generally recognised as such, are but the tip of the iceberg. Using the philosopher Judith Butler and the anthropologist Marianne Gullestad, I discuss how pre- and unconscious discrimination is embodied in unexamined social and conceptual frameworks to open up a larger field for reflection.

“Subjectivity and Absence: Prejudice as a Psycho-Social Theme”, article in book, in Lene Auestad ed. Psychoanalysis and Politics. Exclusion and the Politics of Representation. London: Karnac, 2012. Abstract:  This chapter aims to examine prejudice as a psychosocial field of study. It is argued that psychoanalytic studies of prejudice as a feature of the prejudiced person’s subjectivity leave out the extent to which this phenomenon is founded on a silent social consensus. The social norm, the prejudice that ‘works’, is left untouched. Using Balint’s theoretical reflections on trauma, it is argued that assessments of whose subjective responses and evaluations count are themselves socially structured. This model, and Gadamer’s hermeneutics, is used to show how, when detachment becomes an unqualified epistemic aim, prejudices are concealed and preserved rather than addressed. The phenomenon of prejudice reveals that psychosocial studies should not only be concerned with subjectivity, but equally with what is absent from subjectivity on an individual and social level – with positions which have been rendered unreal, or meaningless.

“To think or not to think – A phenomenological and psychoanalytic perspective on experience, 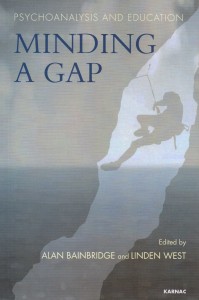 thinking and creativity”, article in book, Alan Bainbridge and Linden West, eds. Psychoanalysis and Education. Minding a Gap. London: Karnac, 2012. Abstract: Juxtaposing Wilfred Bion’s and Hannah Arendt’s reflections on ‘thinking’ as an activity provoked by experience, the article aims to question the preconditions for openness to the differences of new situations encountered. Both theorists reveal thinking as resting on some social conditions. It is argued that the acquisition of a conceptual framework involves an epistemic closure as well as enrichment, and that thinking rests jointly on a fundamental security and willingness to risk one’s supporting frameworks. 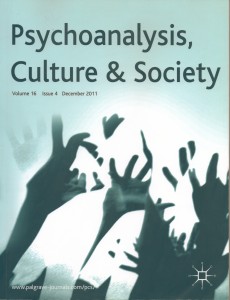 “Splitting, Attachment and Instrumental Rationality. A Re-View of Menzies Lyth’s Social Criticism”, article in the journal, Psychoanalysis, Culture & Society, Vol. 16, No. 4, 2011, pp. 1-17. Abstract: In this article the author argues that the fruitful conceptual innovations in Menzies Lyth’s 1960 study of nurses, in particular her development of the concept of splitting, was achieved through her synthesis of Kleinian psychoanalytic thinking and attachment theory. This move allowed her to situate the psychoanalytic subject and to present what could be read as an original critique of instrumental rationality, although insufficient attention to power relations constitutes a flaw in this conceptual approach.

“To Think or Not to Think – A Phenomenological and Psychoanalytic Perspective on Experience, Thinking and Creativity”, article in the journal, Cliopsy, No. 6 2011, pp. 15-23. The full text is available here.

“To Think or Not to Think – A Phenomenological and Psychoanalytic Perspective on Experience, Thinking and Creativity” (on Arendt and Bion), article in international journal, Journal of Social and Psychological Sciences, Vol. 3, No. 2 2010, pp. 1-18.

“The Pariah’s Story: The Moral Significance of Arendt’s Storytelling, as seen in Rahel Varnhagen”, article in book, in Audun Øfsti ed. The Public Sphere. Essays in Honour of Karl-Otto Apel. Oslo: Res Publica, 2008, pp. 168-203. Abstract: The life recounted in Hannah Arendt’s biography Rahel Varnhagen: The Life of a Jewess is that of a Jewish woman who fought to assert for herself a position in German culture during the period of the Napoleonic wars and the early Jewish emancipation. Rahel Varnhagen (1771-1833) was known for her famous garret salon in Berlin, attended by some of the most talented members of German society, and for being the originator of the “Goethe cult”. Her extensive correspondence, published by her husband after her death, provided an extraordinarily detailed, rich and intimate portrayal of her life and times. To Arendt, the moral significance of Rahel’s situation arises from the fact that she finds herself in a position in between that of a parvenu – she gains access to society as an exception to the general rule, through an act of individual transformation involving baptism and marriage into the aristocracy – and a pariah – an outsider who identifies with other outcasts and therefore involuntarily becomes a rebel against the oppressive norms of the society surrounding her.

“He was never invited to anyone. “Us” and “Them” in “The Man Who Loved Haugesund” Film essay about the documentary on Moritz Rabinowitz (1887-1942), in English and Norwegian: “Han var aldri hjemme hos noen. “Oss” og “dem” i “Mannen som elsket Haugesund“, Dictum no. 3 2005. Full text available here: English version – Norsk versjon.

“The Holocaust in Context”, reportage, In English and Norwegian: “Holocaust i kontekst“, Dictum no. 1 2005.

DICTUM, The Critical View, was an internet journal containing a mixture of scientific articles, journalist critiques, interviews and book- and film reviews. I founded and edited the journal together with Gorana Ognjenovic and Jasna Jozelic from Jan. to Dec. 2005.

Unpublished articles and articles published before 2005 are not included.